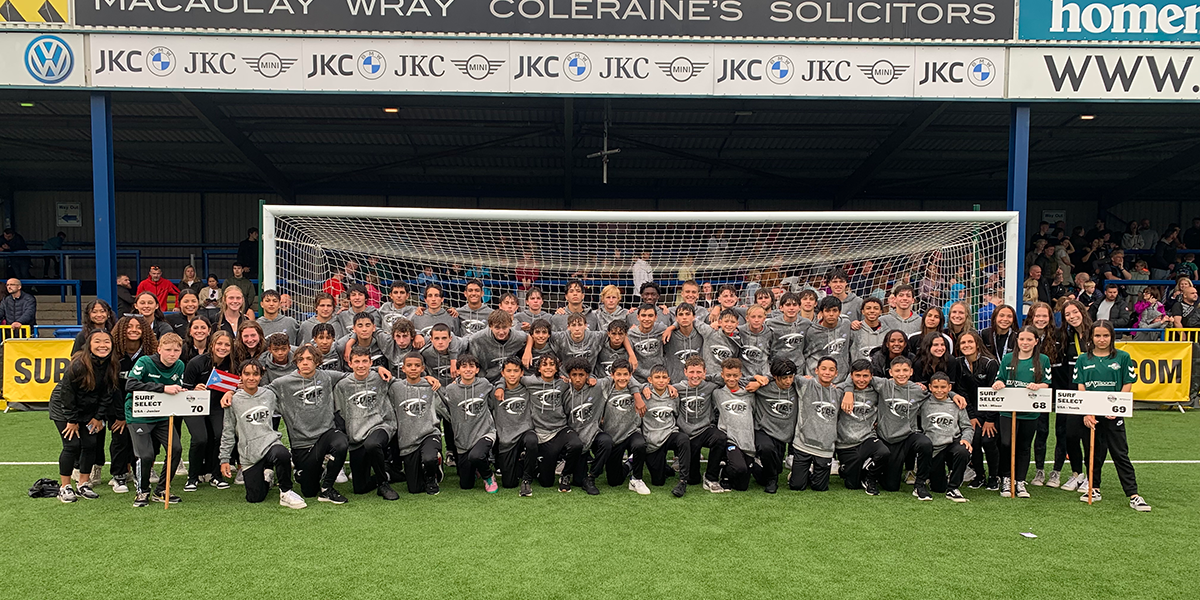 Our four Surf Select teams touched down in Dublin, Ireland on Friday July 22nd to make our first appearance at the SuperCupNI. The first weekend saw our teams finalize preparations for the prestigious event by facing local and international sides in friendly games. On Sunday evening our players and coaches took part in the tournament’s Opening parade and Ceremony through the town of Coleraine and local stadium, along with 75+ teams in front of a thousand local fans and supporters.

Our Boys 2009, 2008 and 2006 teams based on the North Coast, kicked off their games on Monday morning. Our Boys 2009s, competing in the ‘Minor Section’ came from behind to open with a 2-1 win vs Irish Premiership club, Glenavon FC. They followed up with a convincing 6-1 win vs Ballymoney United and a 5-1 win vs Dublin club, Home Farm FC.

They opened the scoring in Thursday’s semi-final vs Dundalk but conceded a late equalizer. They kept their cool to advance to Friday’s final after a 4-3 win on penalties. They faced Irish Premiership club Glentoran FC in the final at Coleraine Showgrounds. After going a goal down, they equalized before halftime to make it 1-1. A second-half penalty put them into the lead before adding a third. An excellent performance from our Boys 2009s to take the win and the championship, becoming the first-ever American side to win the SuperCupNI at any age group!! A proud moment for our Surf Select program.

In the ‘Youth Section’, our Boys 2008s opened with a 3-0 win vs NI National League club Castle Juniors. They took a 2-0 lead in game 2 vs Glentoran FC but in the end, shared the points after a 2-2 tie. The final group game saw them score four goals in the second half to defeat Ballymena United FC 5-0, winning the group on goal difference and advancing to the semi-finals. They faced Glenavon FC for a spot in the final. An edgy first half saw Glenavon take a 1-0 lead. The Northern Ireland side extended their lead early in the second half, eventually winning 4-0. The final game of the week also ended in defeat as they lost out to Linfield FC in the 3rd/4th place game, 5-1.

A glamour tie for our Boys 2006 team in the ‘Junior Section’ saw them face Manchester United on Monday afternoon. The team defended well for large periods but conceded twice during the game; although they created more chances in the second half, they started with a 2-0 defeat. The team faced tough opposition in County Antrim on Tuesday, who had won two of the past three U16 titles at the event. The boys were up for the fight and competed well but lost their second game 2-0. They bounced back Wednesday with a 6-1 win vs Mexican side Atlante FC. Thursday’s Vase category game saw them face another Irish side, County Armagh. Although dominating periods of the game, they were unable to take those chances, with Armagh scoring three unanswered goals. The boys finished strong with a 4-2 victory over San Francisco Glens.

Our Girls 2006 Blue team was based in Newtownabbey, Northern Ireland, and competed in the inaugural Girls U16 tournament. They faced strong opposition in the category, including the U16 National teams of Northern Ireland and the Republic of Ireland along with Glasgow Rangers FC, Scotland, Ottawa City SC, Canada, and Rush Soccer, USA.

They opened with a respectable 2-2 tie with the Republic of Ireland, followed by a 4-2 victory over Glasgow Rangers and a come from behind 2-1 win vs host nation, Northern Ireland. They advanced to Friday’s final, where they faced Glasgow Rangers once again.

A bright start from the team saw them rush to a 2-0 halftime lead. Although they conceded in the second half, they held their lead to be crowned champions! The second American side to lift the SuperCupNI following on from our Boys 2009s in the morning!

We look forward to returning to Northern Ireland next summer for the 2023 edition.