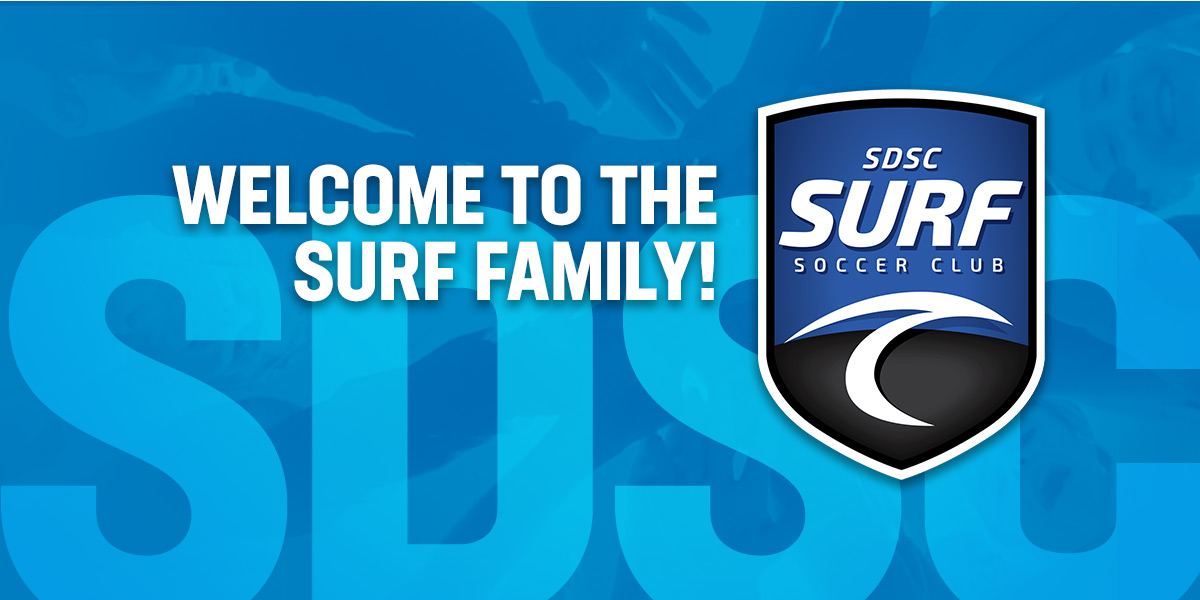 Surf Cup Sports (San Diego, CA) is proud to announce a partnership with San Diego Soccer Club (SDSC).  Based in the North County Inland area of San Diego in the communities of Rancho Penasquitos, Rancho Bernardo, and 4S Ranch, SDSC is a premium youth soccer organization that operates both recreational and competitive leagues. SDSC will rebrand their competitive teams as SDSC Surf beginning with the 2021/2022 season. With this newly formed partnership, SDSC and Surf have committed to work together to improve player development, coaching development, organizational efficiencies, and player pathways across north county San Diego.

“Great things can happen when the walls of competition come down, and the spirit of cooperation rises.  Both Surf and SDSC have long track records of commitment to developing their players and offering the best pathways.  Together, we can create efficiencies that allow both organizations to spend more time focused on the kids and create unique opportunities and experiences for all players involved,” says Brian Enge, Surf CEO.

Led by some of the most experienced, knowledgeable, and passionate soccer minds in the state, SDSC Surf will remain an independent club but will work with San Diego Surf under a shared brand to strengthen both clubs, create a collaborative soccer environment and build elite development programs for their players and coaches in the area. SDSC Surf will be re-branding with the full support of the San Diego Surf Soccer Club, and this new partnership will offer SDSC Surf unmatched access to top-level programming in San Diego, nationwide network resources, and the premium benefits of being part of the Surf Nation program.

“We are thrilled to be involved with one of the best and most progressive youth soccer clubs in America. This exciting affiliation will provide SDSC with many platforms to grow and enhance what we are doing and what we strive to achieve for our players. Surf Soccer adds pathways to grow the game in San Diego and nationally and we feel this affiliation with our competitive program strengthens the development of our players all the way through to the highest level of play. Our coaches, administration staff, and families look forward to building and strengthening our club and through this unique cooperative affiliation in San Diego while continuing to maintain and develop our culture of ‘kids come first’, says Brian Quinn, SDSC Surf Director of Coaching.

As part of Surf Nation, SDSC Surf players and families will be provided additional support both on and off the field and SDSC Surf will remain a community club and a destination for the region’s top talent.  The top players in SDSC Surf will have direct access to Surf Select, an exclusive identification program built through Surf Nation. This program offers selected players the opportunity to compete in the best international and domestic events, picking from a player pool that expands from Rhode Island to Hawaii.

For over 44 years, Surf has been one of the founding organizations in youth soccer. With over $7 Million in charitable donations, 16 national championships, and countless professional, collegiate, and youth national team players, we are forever striving to be the “Best of the Best.” SDSC Surf joins the 36 Surf National Affiliates to comprise what we’re proud to call Surf Nation.

San Diego Soccer Club (SDSC) is a non-profit, 501(c) 3, youth soccer organization offering both competitive (SDSC Surf) and recreation (PQ Rec and RB Rec) leagues to over 3200 players in the North County Inland area of San Diego. SDSC, including its legacy clubs, was founded in 1990, growing organically and through the consolidation of multiple highly regarded soccer programs. SDSC has been an integral part of the San Diego soccer community for over 30 years sharing a legacy of leadership, exceptional player development, stable operations, and a commitment to the community.